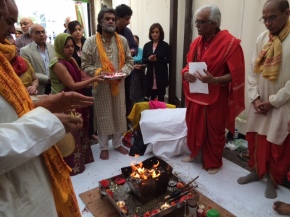 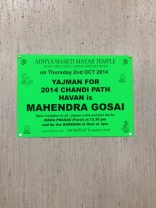 Today being the 8th day of Navratri,  the powerful Durga Ashtami havan was performed at Adhyashakti Mataji temple. The havan  began at 10 a.m. inside the temple compound.

Intense pujas and recitation of slokas were performed by our dharmakata Rajnibhai Dixit and priest Sukumarji in front of a mini-Mataji statue, specially decked up for the havan. Chairman Jaswantbhai Maicha, attired in his special puja robe, provided all assistance.

The havan was followed by Faria Mahaprasad at 12.30 p.m. The lunch consisted of fasting food prepared deliciously by our star chef Subhash Ganatra and team.

The haavan continued and concluded with Maha Aarti at 3 p.m.